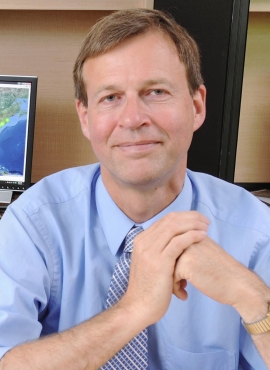 Dr. Bert Bras is a Professor at the George W. Woodruff School of Mechanical Engineering. He came to Georgia Tech in 1992 and started working on incorporating environmental issues into mechanical engineering. His research focus is on sustainable design and manufacturing, including design for recycling and remanufacture, bio-inspired design, and life-cycle analysis. His primary research question is how to reduce the environmental impact of companies while increasing their competitiveness, i.e., how to promote sustainable development from a triple bottom line perspective. For his research, he has collaborated and received funding and donations from institutions such as the National Science Foundation, the Georgia Research Alliance, Army Environmental Policy Institute, AT&T, Motorola, Chrysler, Lucent, Interface Flooring Systems, and Ford Motor Company, among others. He has authored and co-authored over 140 publications in his research area. He has developed and taught undergraduate courses related to Environmentally Conscious Design & Manufacturing since 1993. He is also a member of the Systems Realization Laboratory. In 1999-2000, he was part of a group of experts charged by the National Science Foundation and Department of Energy through the WTEC - World Technology Evaluation Center with evaluating the state-of-the-art in environmentally benign manufacturing. He visited companies, universities, and governmental institutions in Europe, Japan and the US. In 2000, he co-authored with a former student Jan Emblemsvag a book titled “Integrated Activity-Based Cost and Environmental Management - A Different Approach to ISO 14000 Compliance”, published by Kluwer Academic Press. From 2001 to 2004, he served as the Director of Georgia Tech’s Institute for Sustainable Technology and Development. He has provided consulting services for the Chrysler Corporation, United Technologies Corporation, LG Electronics, and BFGoodrich. Dr. Bras was named the 1996 Engineer of the Year in Education by the Georgia Society of Professional Engineers, received a NSF Young Faculty Career Award in 1996, a Society of Automotive Engineers’ Ralph R. Teetor Award in 1999, and the 2007 Georgia Tech Outstanding Interdisciplinary Activities Award. A native of The Netherlands, Dr. Bras obtained his Master of Science (“Ingenieur”) degree in Mechanical Engineering from the University of Twente, The Netherlands, in August 1987. After completion of his M.S. thesis he was hired as a full time research associate at the Maritime Research Institute Netherlands’ (MARIN) Design Research department. He was sponsored by MARIN to obtain his Doctor of Philosophy degree in Operations Research from the University of Houston. Upon completion of his Ph.D. in May 1992, he received a Post-Doctoral grant from the Institute of Space Systems and Operations at the University of Houston.