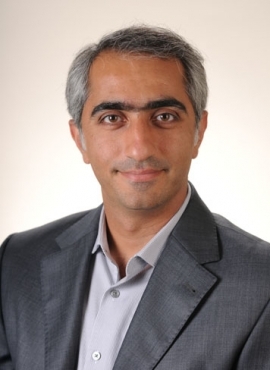 Kamran Paynabar is a Fouts Family Career Professor and Associate Professor in the Stewart School of Industrial and Systems Engineering at Georgia Tech.

Dr. Paynabar’s research interests comprise both applied and theoretical aspects of data mining and statistical modeling integrated with engineering knowledge. His current research focuses on the analysis of high-dimensional complex data including multi-stream signals, images, videos, point-clouds and network data, for system modeling, monitoring, diagnostics and prognostics using semi-parametric and nonparametric approaches. The generic methodologies he develops have been widely utilized in a variety of applications ranging from manufacturing including automotive, aerospace, medical device, and so forth, to healthcare applications including cardiac surgery and rotator cuff tear surgery.

Dr. Paynabar is the recipient of the INFORMS Data Mining Best Student Paper Award, the Best Application Paper Award from IIE Transactions, and the Wilson Prize for the Best Student Paper in Manufacturing. His papers have been published or accepted for publication in Technometrics, IIE Transactions on Quality and Reliability Engineering, Journal of Quality Technology, ASME Transactions-Journal of Manufacturing Science and Engineering, and Quality and Reliability Engineering International Journal.

He has a passion and enthusiasm for teaching and sharing knowledge with his students, and has been recognized with the Georgia Tech campus level 2014 CETL/BP Junior Faculty Teaching Excellence Award. His teaching philosophy includes a structured method of teaching with clear communication, strong in-class interaction and engagement, and an imperative on a stress-free learning environment in an effort encourage intellectual curiosity. His overarching goal is to teach students how to think.